Greetings ALL...I originally decided to do 7 Half Marathons this year, but through the sponsorships of several people and organizations I am able to do 10! So firstly, I would like to thank the following: First Lady Rachelle Benson and Stepping Higher, Inc, Tracy Morris and the Western Region Phi Beta Sigma, Inc., Maritza Johnson and the Friends of Nubia Foundation, Zerocancer.org and all the donors! Most of these runs benefit Cancer research and we all know that cancer has affected so many of us, our loved ones and friends. (Personally I lost my father to prostate Cancer)


Well...I was supposed to write a blog about each run, not just for the enjoyment of the public, but I want to keep this bit of "Sirius Fitness" history to pass down to my kiddies! Anyway, better late than never. I have decided to summarize the 5 1/2 Marathons I have already done and BLOG the next 5 in the several upcoming months. My main goal is ALWAYS to "Finish", but my ultimate goal is 1:45 minutes, hence the title of this blog... "The Drive for 1:45" (wish me luck!) The main difference with these NEXT several runs is...I will actually train for them this time (lol!) 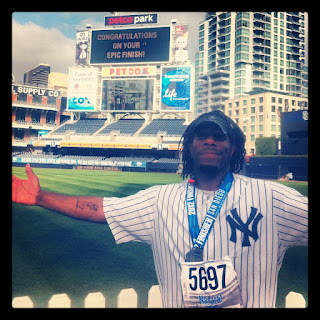 "Great inaugural run and nice course. This was a very organized run and it was my first long run since the 2011 Rock n Roll 1/2 Marathon in San Diego. I was told not to participate due to sciatica, which was still bothering me... but I had to push through. Yes...I ignored my physical therapist! ;-(  I felt good, ran a 2:11 and during the run I ran into Brian Catacutan, who will be running several 1/2 Marathons this year as well with his fiancee, Jenn Vela. Some of my "partners in crime" who ran were, Mark McCloskey and Tracy Willis. I can't wait until 2013!" 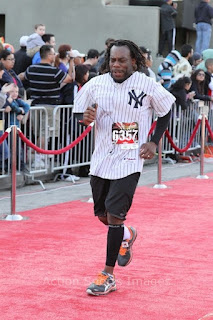 "This was a lot of fun because I got to travel to HOLLYWOOD! The family came along for the ride and for support and it was a GREAT Inaugural Run! Lights, Cameras, Red Carpet...Yeah! This was also an organized run, nice course and nice sights to see in the Hollywood community! Now...I was doing great until mile 11 and then... Calf number one cramped up and guess what happened two minutes later??...Calf number two cramped up. (I guess I didn't hydrate enough!...my bad!) I was ROCKING and ROLLING up until that point but I wobbled and hobbled across the finish line with a 2:12

NEXT BLOG I will briefly summarize my experiences with:

La Jolla Half and the Safari Half!

Posted by Sirius Fitness at 1:45 PM