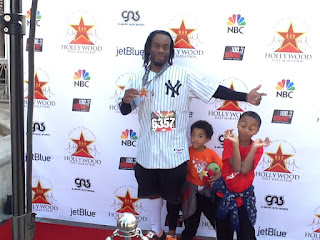 Well...Don't call me CrAzY, but I'm going to run 7 Half Marathons this year because I'm turning 43 this year. I'm using my incredible math skills and adding the 4 + 3 and equaling 7! Yes 7! Well... I've already conquered 2 and though I am happy that I completed them, I want to do better. Now I can make the excuse that I am recovering from Sciatica, which sidelined me since September, but I won't and I will stretch, do yoga, get massages, pray, etc... until I'm at full speed. I'm using the next two (La Jolla Half and Safari Half) as "training" runs because I really want to kick the Rock n Roll San Diego's butt! I was a little disappointed that my calves cramped up at mile 11 of the Hollywood Half and "messed" my time up! (It was my fault...I didn't hydrate well enough.)~What?... THAT WILL NEVER HAPPEN AGAIN!!)

Well...in addition to the Causes** (which is the most important part of these runs), I also want the "bling" (Medals) from these runs. I want to look back when I can't run anymore (when I'm 100...uh, maybe not...a 100 year old ran a Marathon last year) and say that I kicked butt in my "prime" and ran a WHOLE LOT of Half Marathons and I was able to "inspire" others to do the same! Now these "several" Half Marathons will culminate with the LAS VEGAS Rock n Roll Half running at night with the cRaZiEs along the "VEGAS STRIP!" in December! Par-Tay Time!! Wish me luck!

**Everyone has been "touched" in some way by the devastation of cancer...and that is "one" of the reasons I run. I appreciate that many of these Half Marathons benefit cancer research. My father died of prostate cancer at 55 (way too young!) and I know numerous folks who have lost loved ones to this deadly disease. I'm gonna run until there is a cure!

Posted by Sirius Fitness at 7:16 PM